Menominee is the southernmost city in Michigan's Upper Peninsula.  It is on the north side of the mouth of the Menominee River where it flows into Green Bay. It has a population of 8,599, and is the county seat of Menominee County. 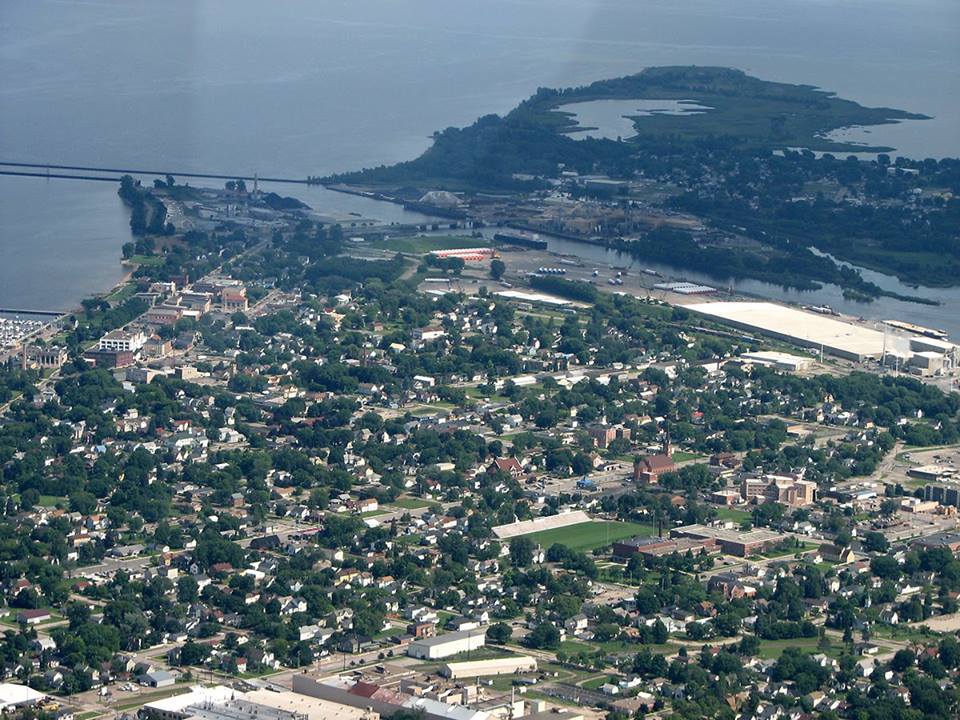 It's "twin city" is Marinette, Wisconsin on the south side of the river. It has a population of 10,608, and that makes the Twin Cities a pretty large place for this part of the country. 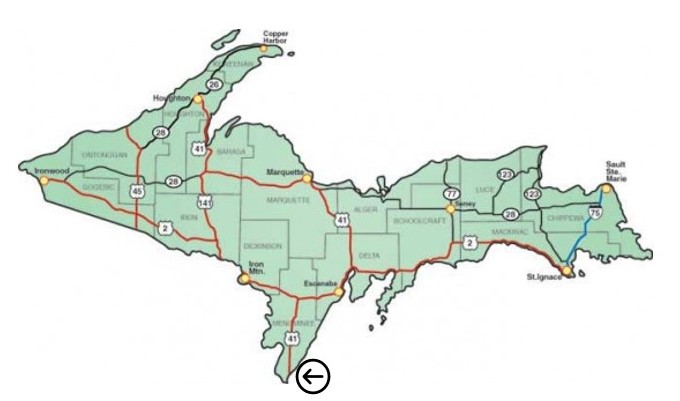 The first people who lived in this area were members of the Menominee Indian Tribe.

The name of the tribe and the city are derived from the English translation of the Indian word for "wild rice", a staple that was an important part of the tribes' diet.

Menominee became a prominent lumber town in the 1800s.  There were dozens of sawmills and other industries.

At the peak of its population and prosperity in the late 1800s, Menominee produced more lumber than any other city in the United States. 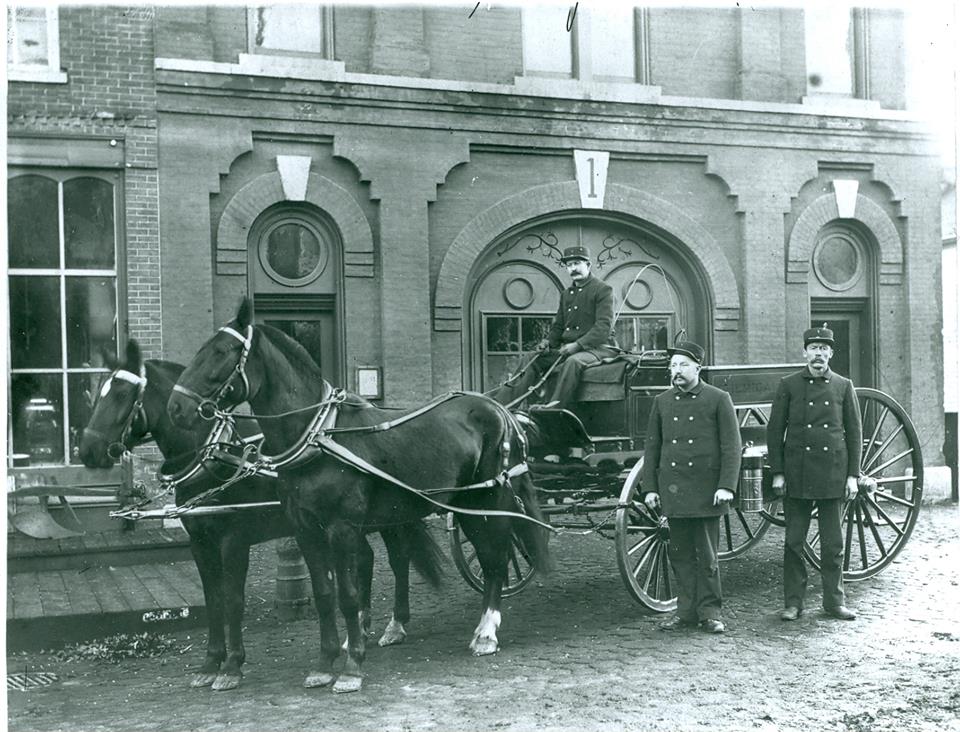 Commercial fishing was also an important enterprise in those days and both Menominee and Marinette had sizable fishing fleets.

Green Bay Perch was a staple in the diet of many people here for years. 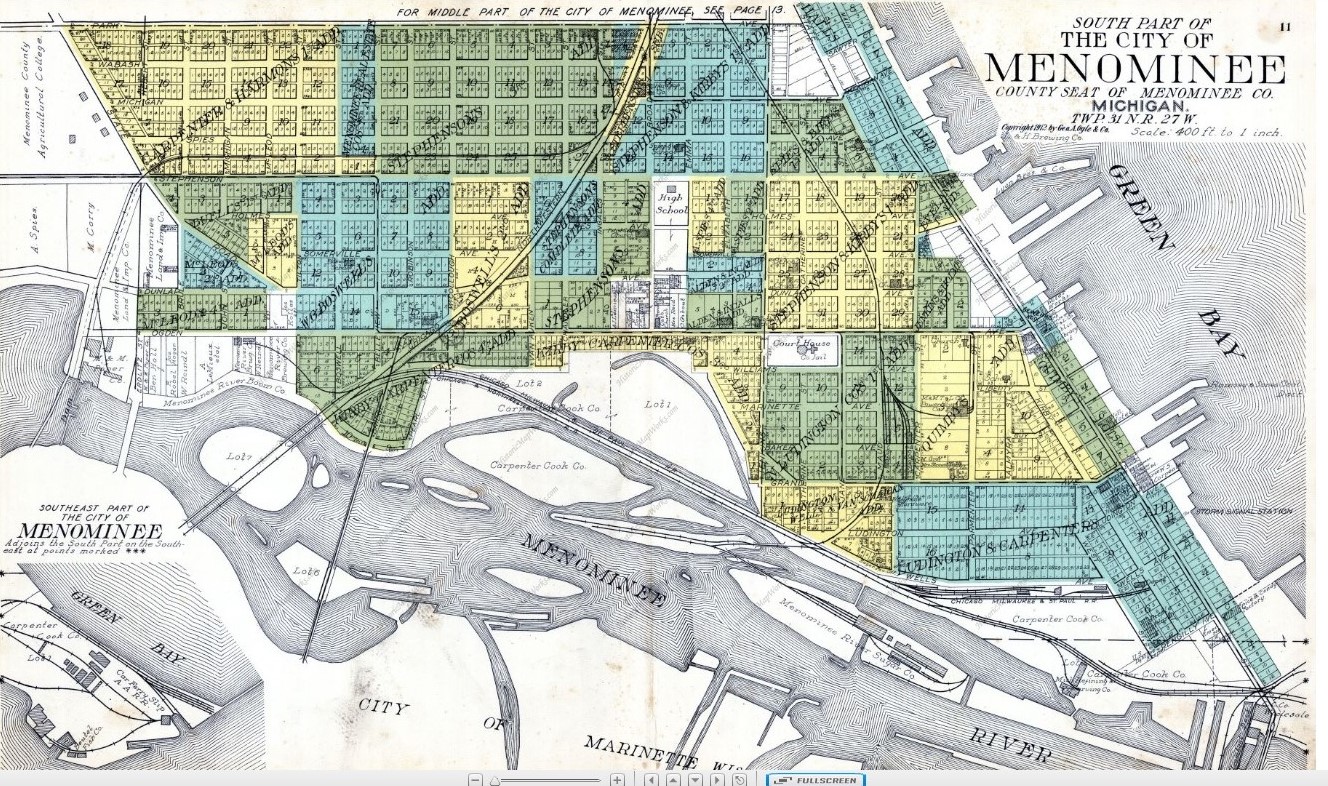 Signs of this former prosperity can be seen today in the old partially restored Menominee Opera House and many historic buildings in the downtown area.

Downtown Menominee is a historic district. The historic post office still stands in the Menominee of today. 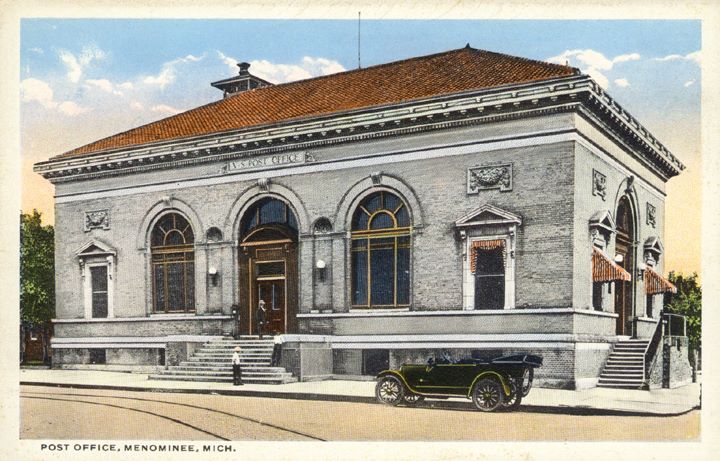 It seems all good things must end, and so did the lumber industry when all the trees had been cut down and milled.

Fishing also began to go downhill because of parasitic lamprey eels that hooked rides on the bottom of seagoing ships coming into the Great Lakes through the St. Lawrence Seaway. 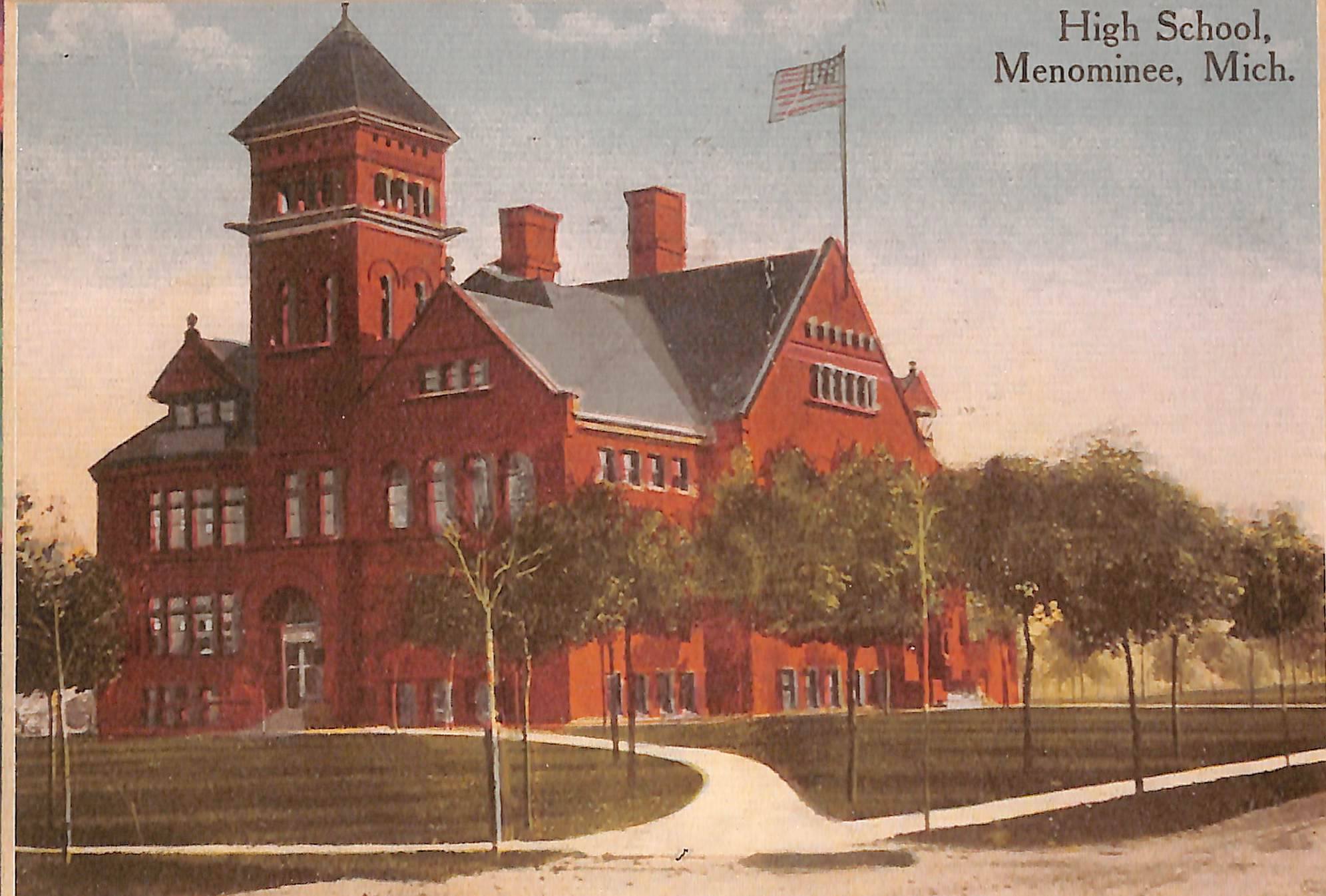 As the lumber boom was quickly winding down the future looked bleak for Menominee.  But then along came inventor Marshall Burns Lloyd.

He was the inventor of the Lloyd Loom, an automatic weaving machine that could make wicker.

The factory he built on the shore of Green Bay in Menominee in 1906 made wicker baby buggies and furniture. 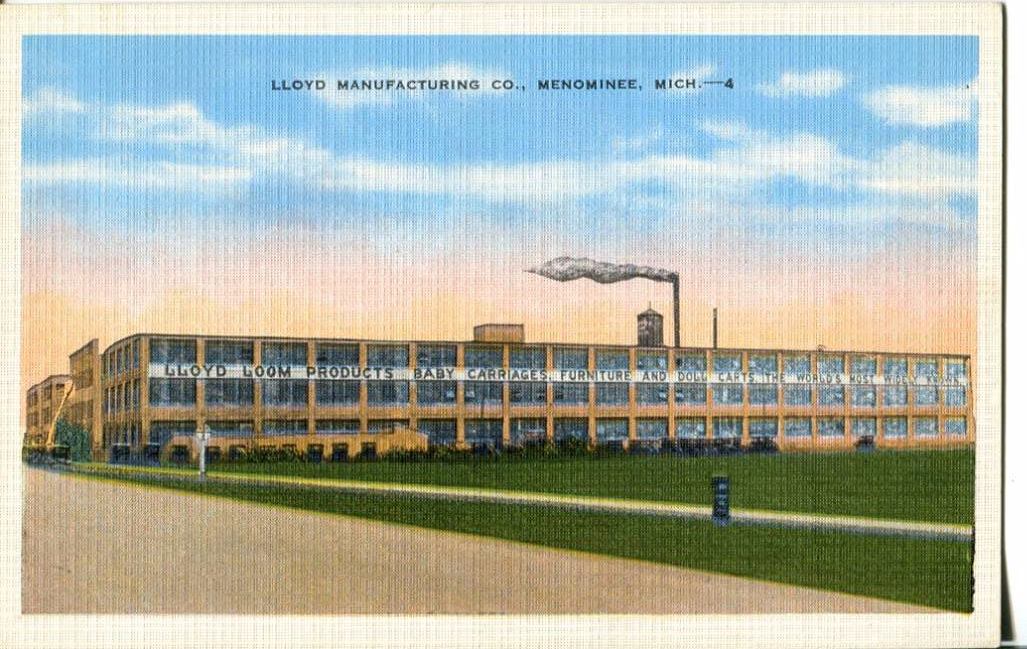 Generations of Menominee people worked at Lloyd Manufacturing, and many locals still work in the same building today as did their fathers, grandfathers and great-grandfathers.

The factory changed hands in 1982 and is now called Lloyd Flanders. 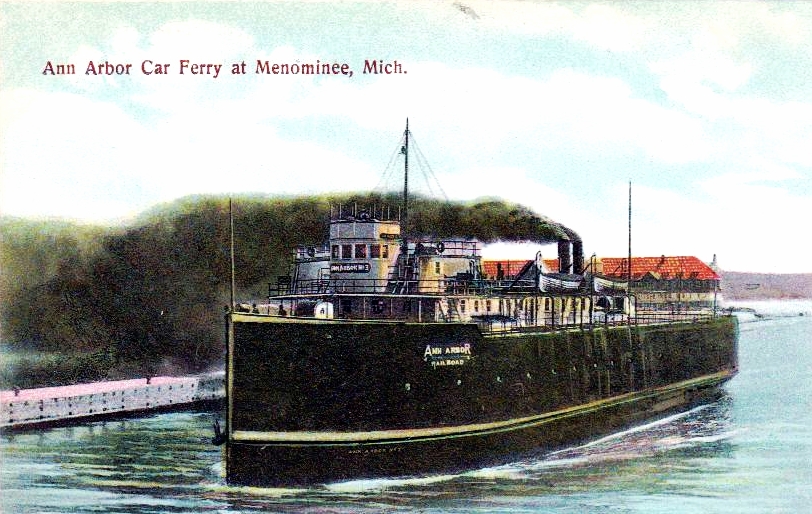 The Ann Arbor car ferries transported railroad cars, passengers and their cars, from Frankfort, Michigan, to Menominee at a railroad head and loading dock near the base of the Menominee North Pier Lighthouse.

This route was active from 1894 to 1982, as far as I can tell.  My friends and I were able to entertain ourselves for hours jumping off the docks into the Menominee River. 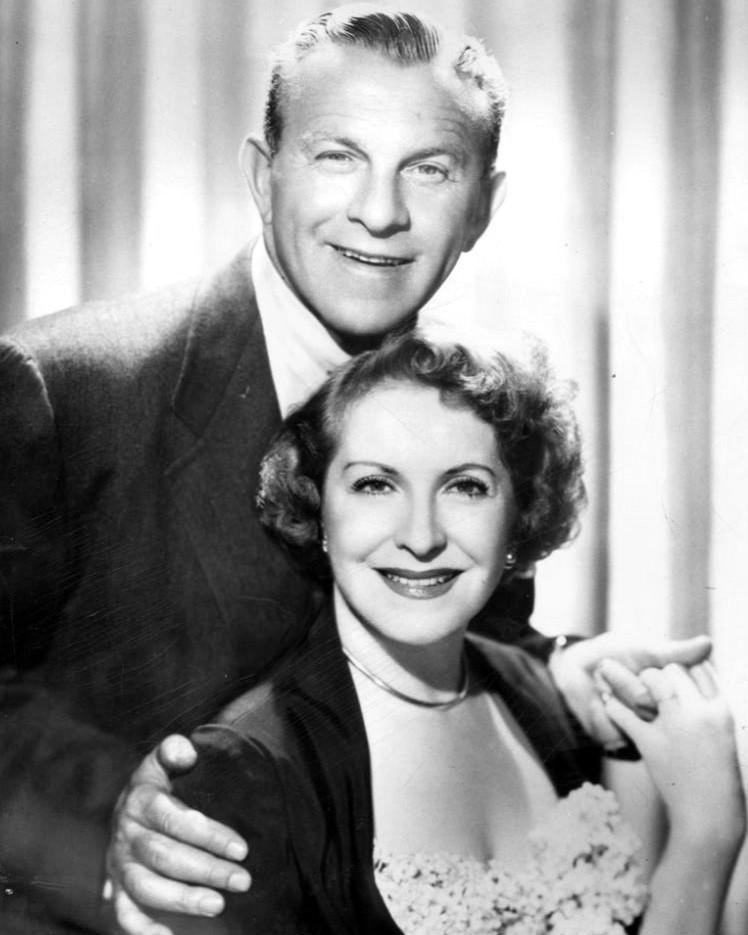 A humorous historical tidbit involves the old time comedy team of George Burns and Gracie Allen.  They were one of the most popular radio shows in the 1930s and 1940s.

In 1940 someone started up a publicity stunt called "Vote for Gracie" in which Gracie was running for President of the United States.  Someone also nominated her for Mayor of Menominee, but she was disqualified because she was not a resident.

Many historic buildings are still in use in Menominee, linking the modern city to the glory days of the past.  One example is the Menominee County Courthouse.

It was built in 1875 and is on the National Register of Historic Places.

A lot of Menominee people work across the river in Marinette businesses.  The biggest employer over there is Fincantieri Marinette Marine.

The precursor company, Marinette Marine was founded in 1942 by Dr. C. H. Boren.  Harold Derusha assumed ownership of the company in 1952. 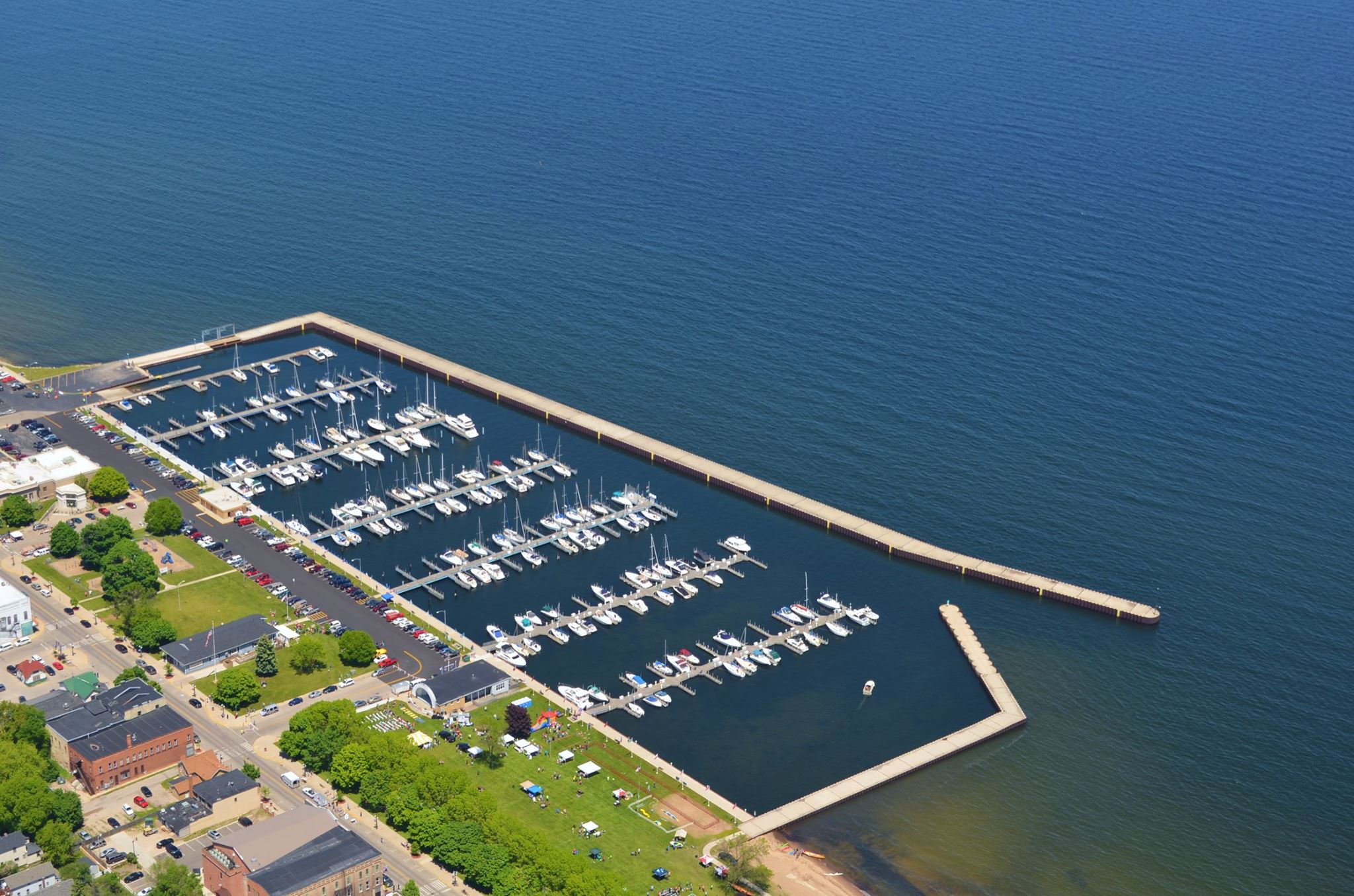 The centerpiece of downtown Menominee is the marina on the bay that has modern permanent slips and transient facilities.  The marina was built in the 1930s by the Works Progress Adminstration as part of Franklin D. Roosevelts's New Deal.

It has been maintained and upgraded over the years by the City of Menominee and is a first class facility and an important part of the summer tourism trade. 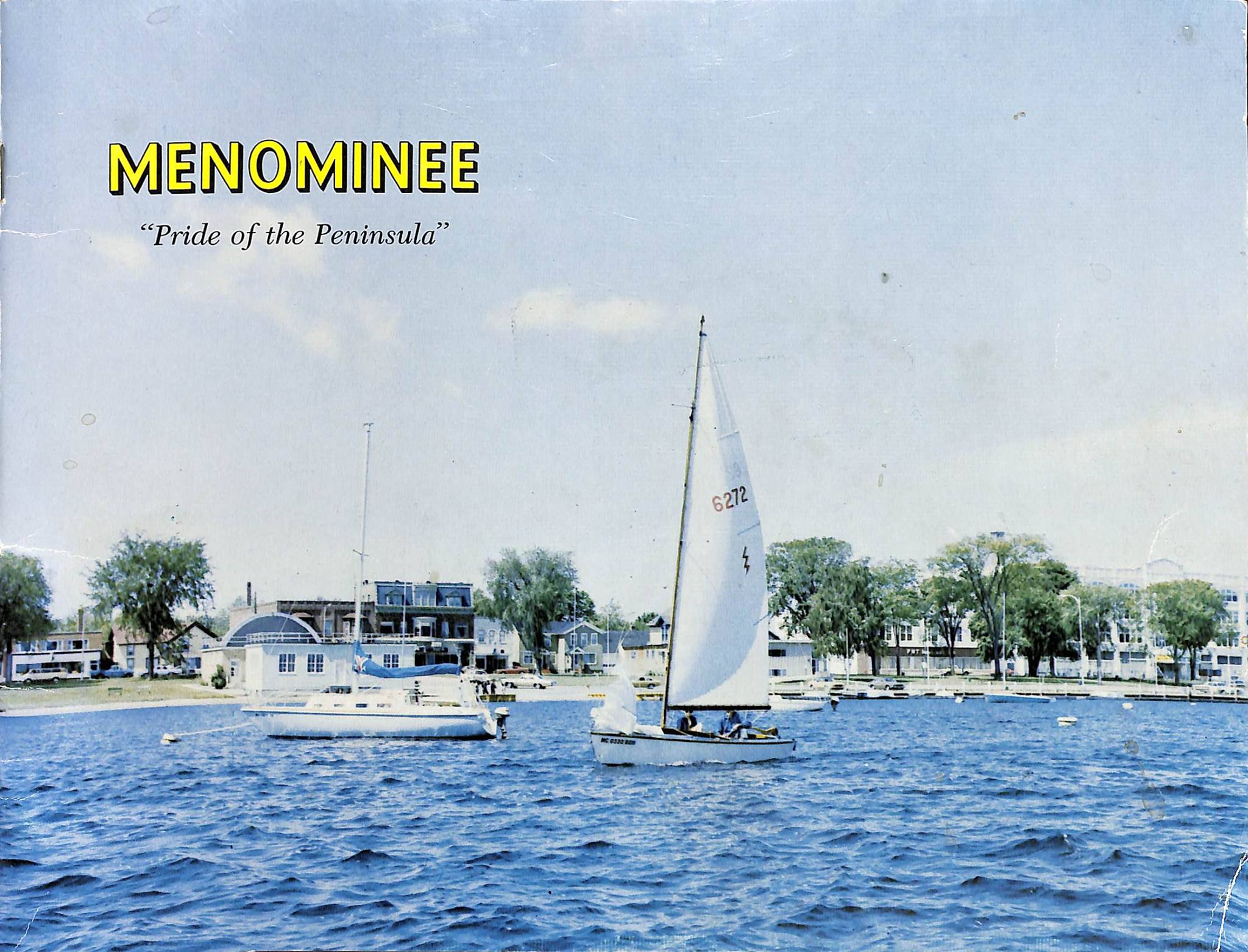 A Lightning Sailing Out of Menominee Marina

Menominee is an important sailing port on the Great Lakes.  In addition to local sailing races, the city is noted for having one of the most successful sailors and boats in the history of Great Lakes racing.

This skipper and his boat have won the famous Chicago-Mackinac race along with many others.  His beloved boat is in the Menominee Marina and her skipper is still an active sailor.

The historic First National Bank building in Menominee was built in the early days of the city's prosperity.  It has been accurately restored by a local business man and is in daily use as offices for his family businesses. 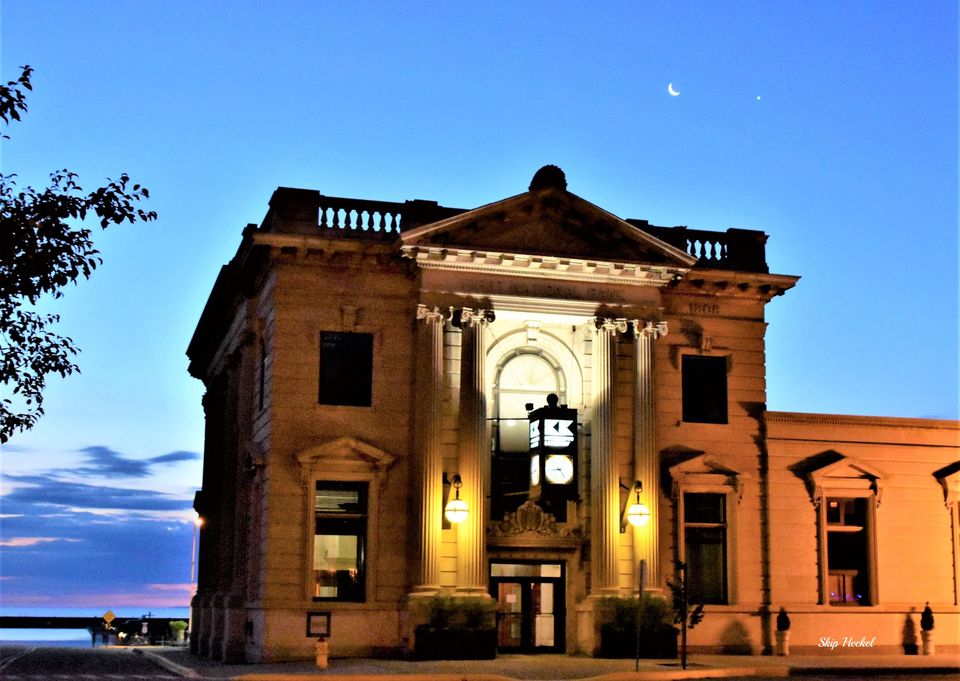 Memorial Park is a few houses north of the old First National Bank. It  has a monument that memorialized all of the local military veterans who had died in war.

When I was young, the park had many elm trees.  Each tree had a bronze plaque honoring a veteran.  The Dutch Elm disease took out those trees long ago. 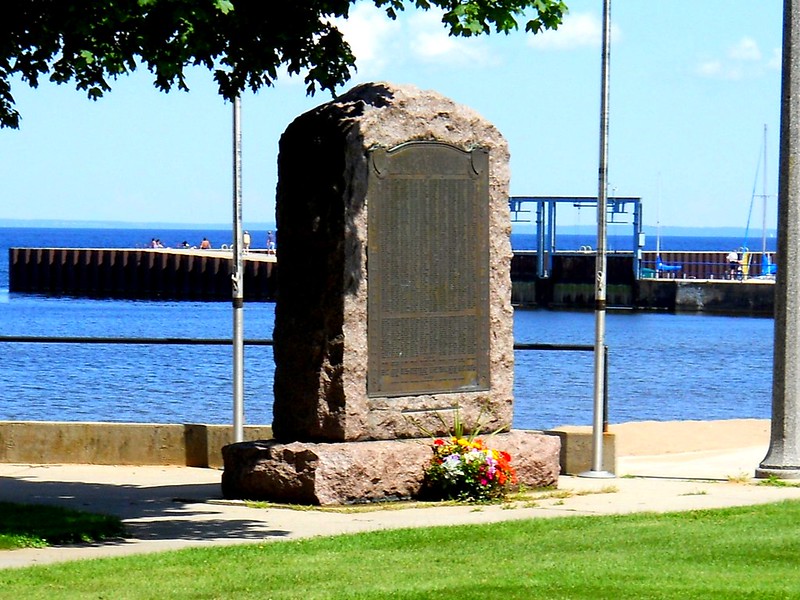 My family home was immediately north of Memorial Park.  The park was the view we had from our front room bay window. 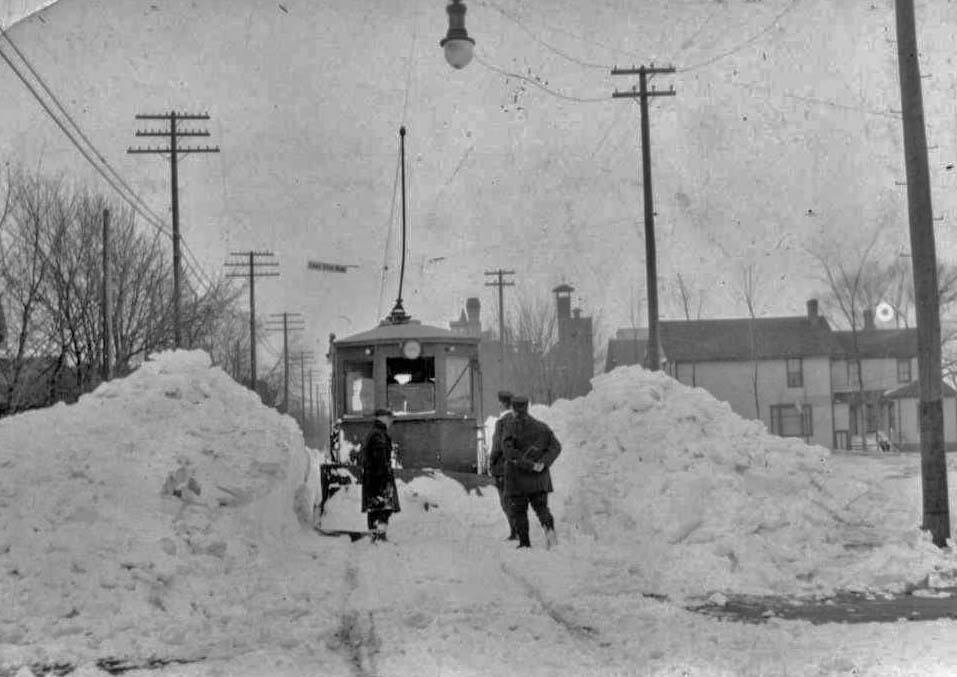 Miller House on First St Back in the Day

The house was at 1204 First Street and I believe had been built in the 1870s.  When my parents bought the house it was known locally as "the Gosling house" after previous owners. 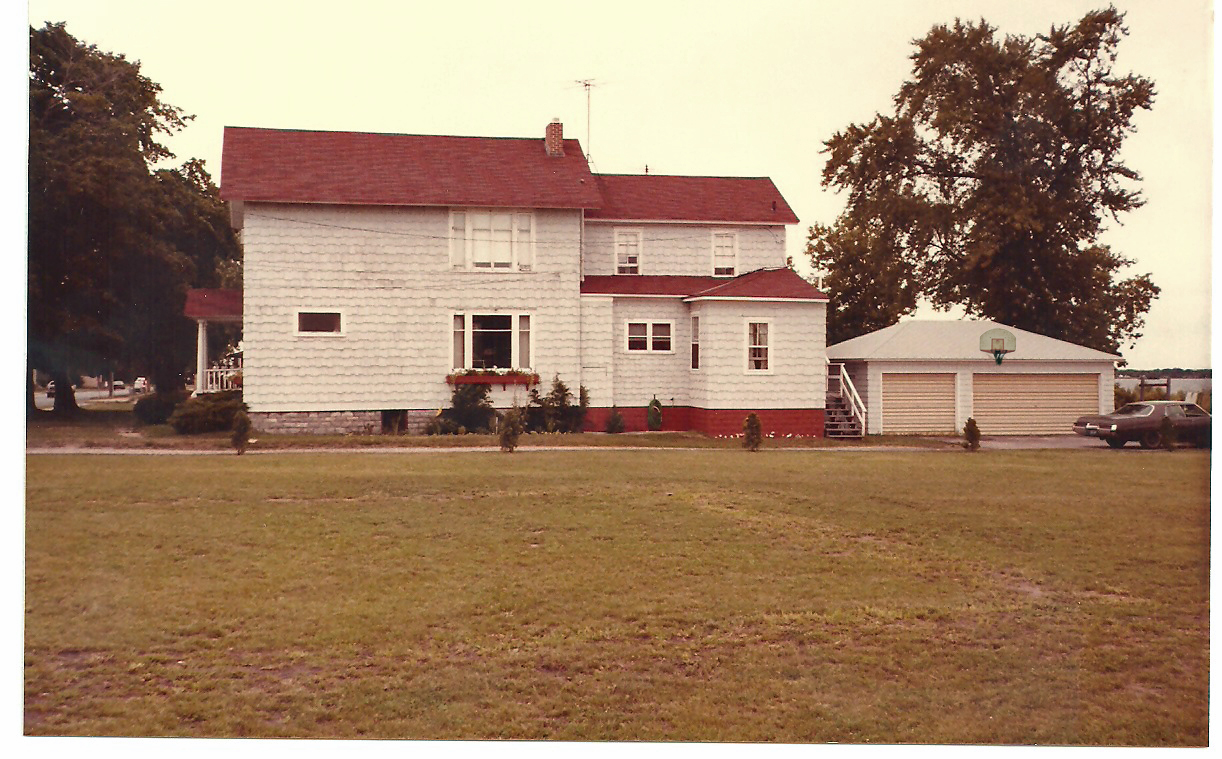 This is the house where my brother and sisters and I were raised.  It was a great place to live.

We had a basketball backboard and hoop that my dad installed over the garage door.  My brother Pat and I shot many baskets there over the years. 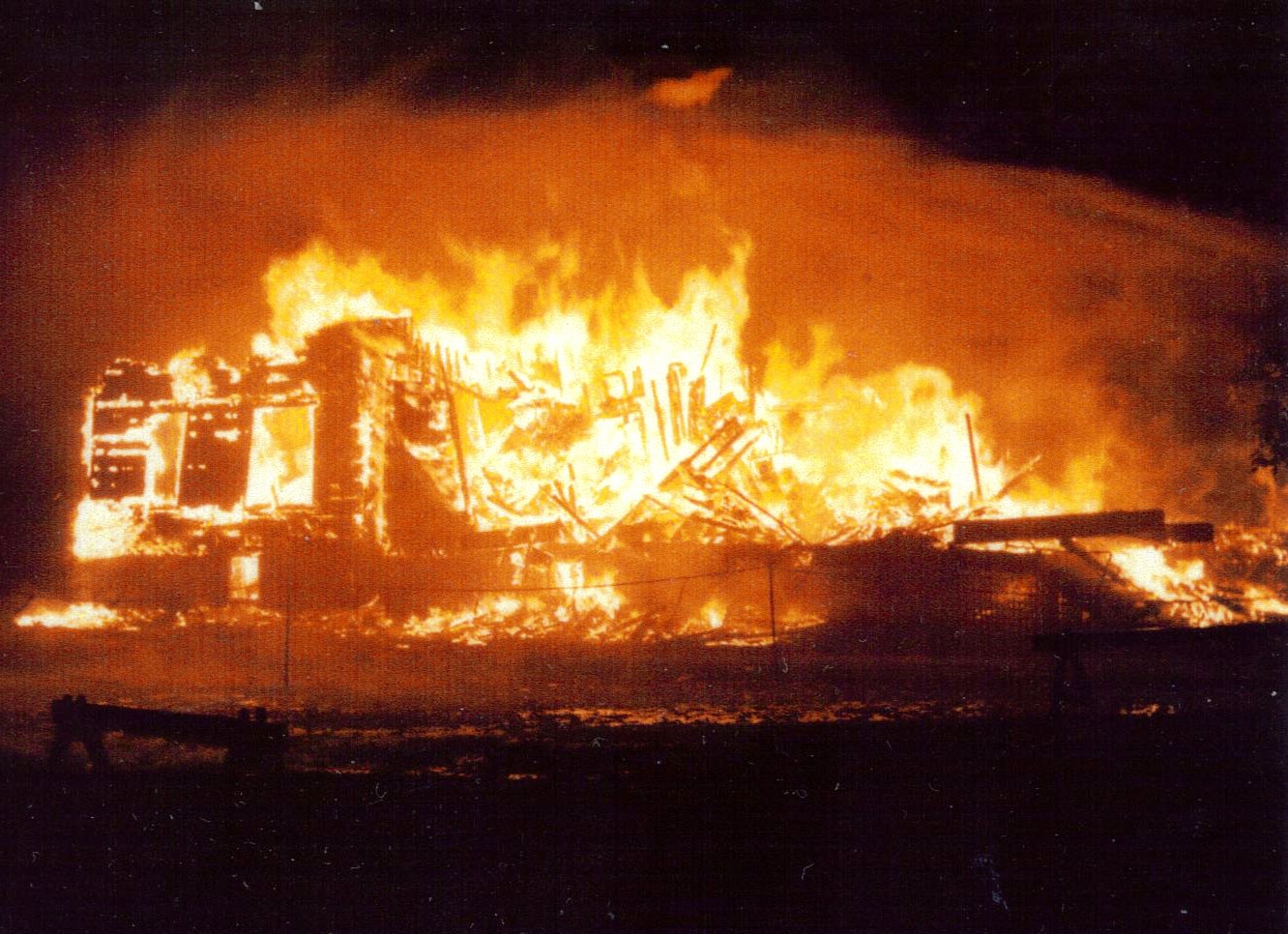 The City of Menominee bought the house sometime after my parents had sold it.  They wanted it for an expansion of Memorial Park.  They burned it down as a training exercise for the fire department.

Only memories remain.  There is now a parking lot where the house once stood.

MENOMINEE IS A SPORTS TOWN

Menominee is in the country known as "Packer Land", which means that the overwhelming majority of townspeople are fans of the Green Bay Packers.  The city of Green Bay is about 57 miles south of the Twin Cities.

The city is very serious not only about the Packers, but about their home town athletic teams as well.  Menominee and Marinette have a high school football rivalry that is the third longest in the United States.

The private and public school from elementary school on up have organized sports teams.

The twin cities nearly shut down during the annual "M&M" game when the Menominee Maroons play the Marinette Marines. 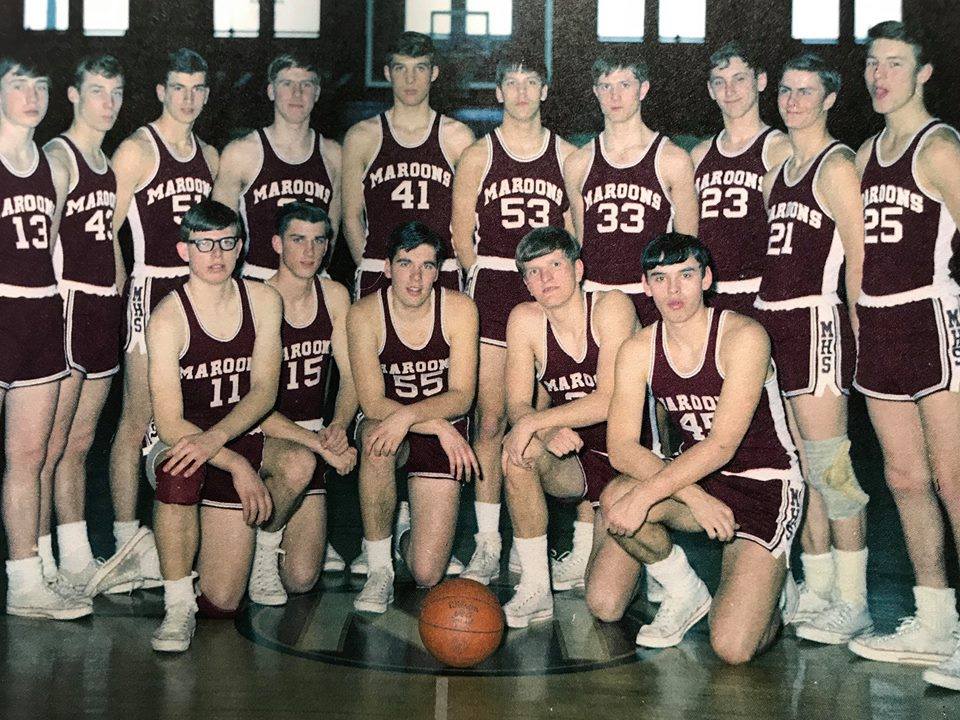 The Menominee Maroons basketball team won the Michigan state high school championship in 1967.  My brother Pat was on that team.

Many of the town's great athletes are enshrined in the Menominee High School Athletic Hall of Fame.

Several athletes from this city are also inductees in the Upper Peninsula Athletic Hall of Fame.

For you basketball fans, here is a Youtube video of the entire state championship game in 1967, Menominee vs Willow Run.

Like most places in the Upper Peninsula, Menominee has its fair share of taverns that serve as neighborhood gathering places. 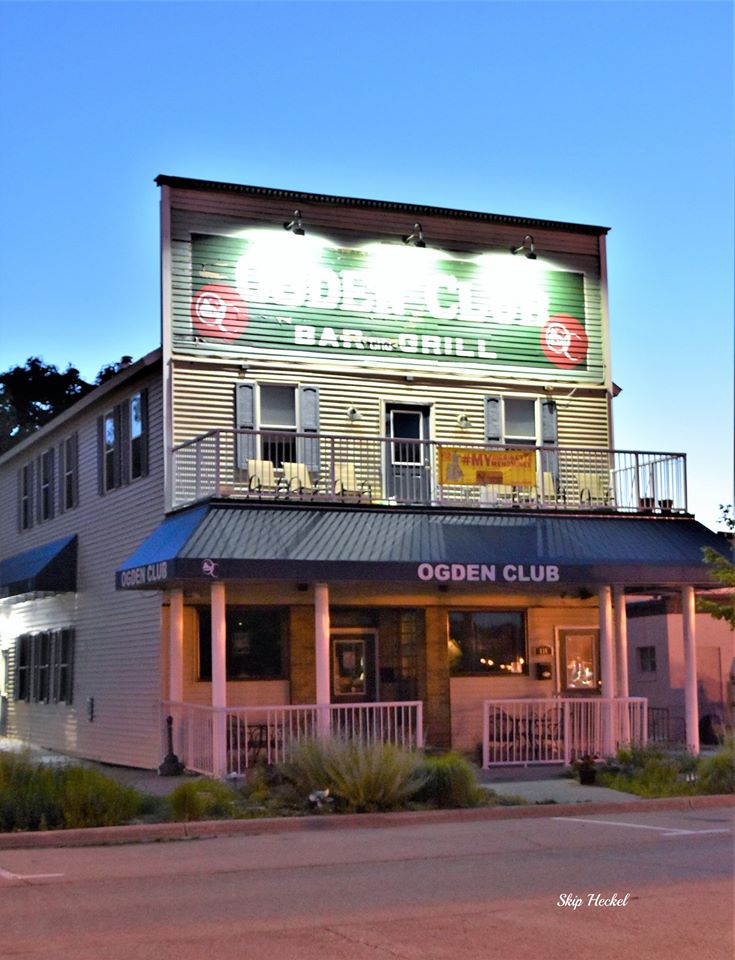 One such tavern in downtown Menominee is the Ogden Club, still around after many years and several owners.  It was my watering hole in the old days and still is when I'm in town.

A successful businessman born in Germany, John Henes, Sr., was a brewmaster and inventor in Menominee.  He invented a beer bottling machine in 1897 that became the foremost such machine in the beer industry when it was first used in 1903. 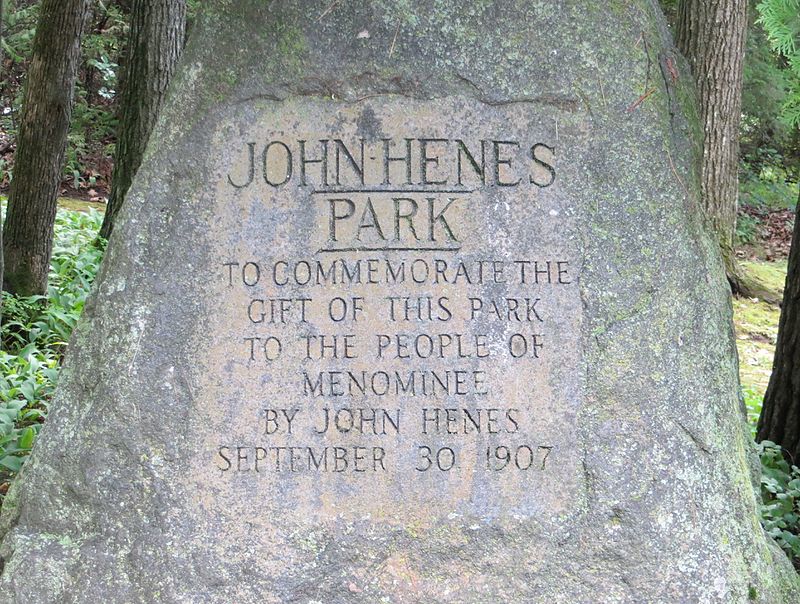 He dedicated a park to the City of Menominee in 1907 that has become one of its most beloved places.  It is on a promontory that extends out from the shore of Green Bay on the north side of town. 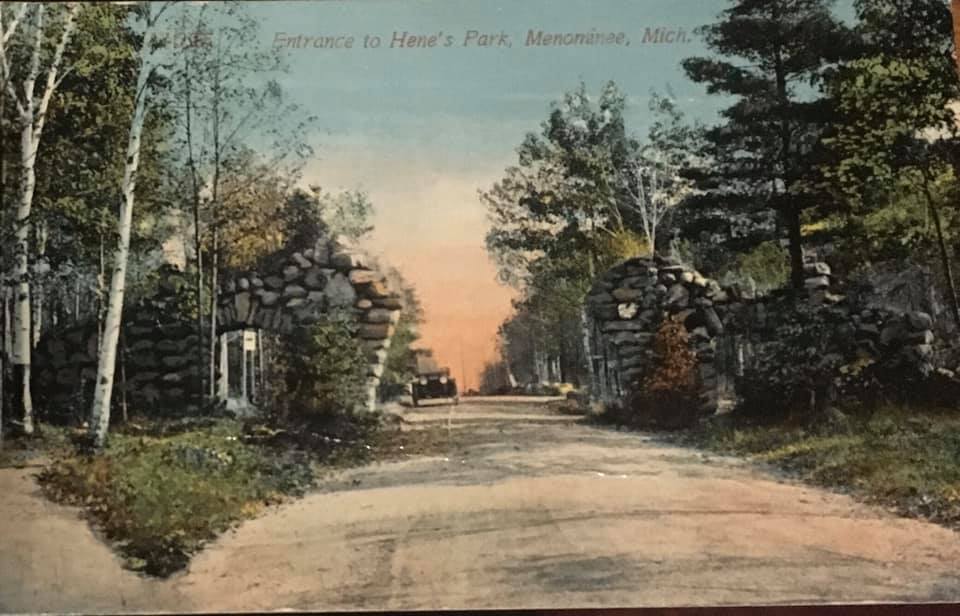 It is a nicely wooded park with many picnic sites and a popular swimming beach.  In the old days it was somewhat of a local "lover's lane" where a guy could borrow his dad's car and take his girl friend out for some privacy. 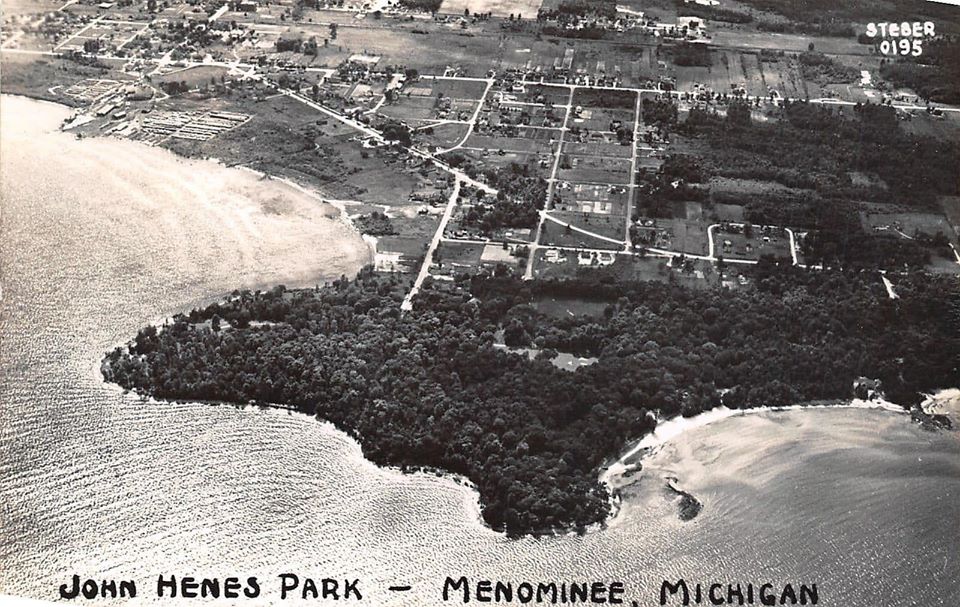 Over the years the park has hosted some animals in its zoo, including deer and a changing variety of other animals that can be petted by the children.  The park is dog friendly, too.

RIDING THE LOOP FOR HOURS ON END

A favorite pastime of teenagers of my generation was riding around what we called "The Loop."

This was a route that circled both sides of the Menominee River.  If you started at the Menominee Marina, for example, you might drive south down First Street to the Menekaunee Bridge and cross the river into Marinette on Ogden Street. 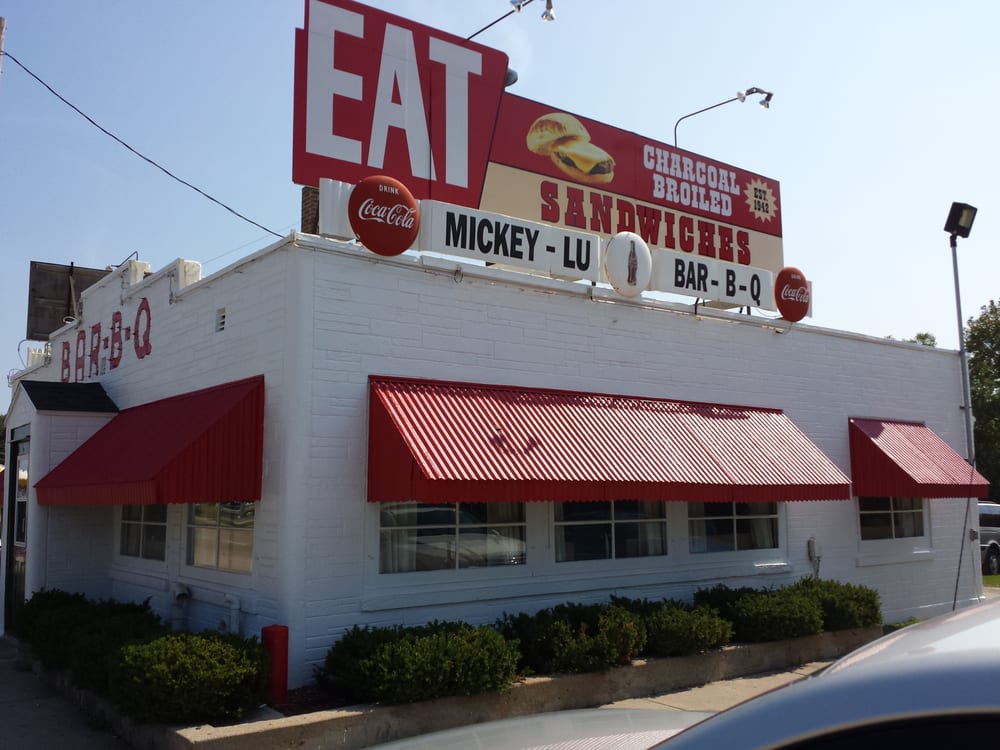 This went into downtown Marinette where you would cross back into Menominee on the Interstate Bridge.

You would then turn right on 10th Avenue until it dead ended at Electric Square in Menominee at the First National Bank, turn right on First Street and end up at the Menominee Marina.

If you were lucky enough to have some spare change in your pocket, you would jump off the loop long enough have a burger at Mickey Lu's BBQ in Marinette.

Some boys and girls would also jump off the loop to take advantage of one big difference between Michigan and Wisconsin.  The legal drinking age in Wisconsin was only 18, in Michigan it was 21.

This difference created a nice demand and supply situation with many saloons in the Marinette area catering to young folks from both sides of the river. 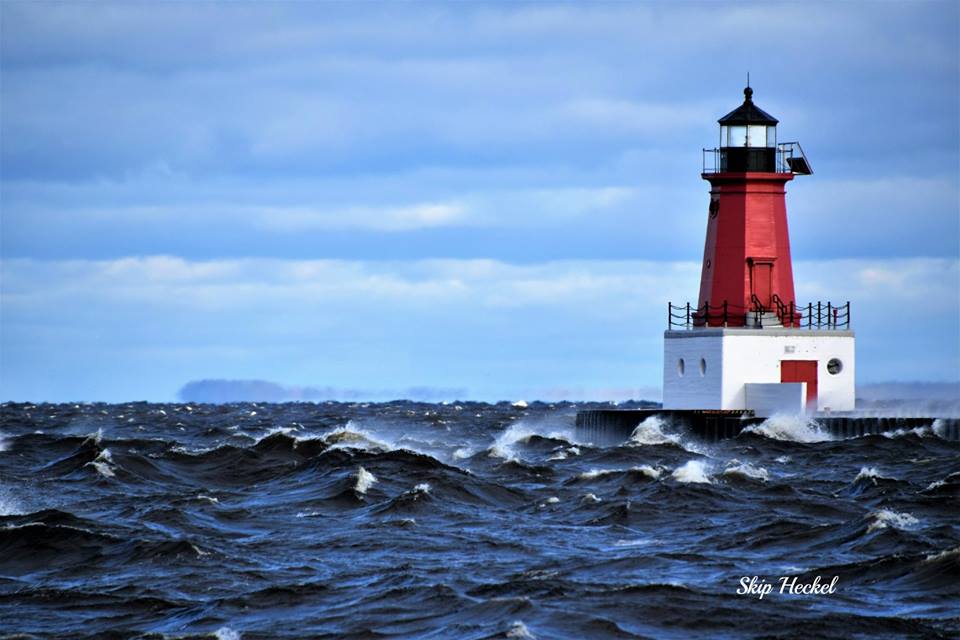 The Menominee North Pier Lighthouse is one of the most photographed of any in the Upper Peninsula.

The lighthouse is loved by the people of Menominee who have made a great effort to restore it and open it to the public.

They never get tired of photographing their beloved landmark. The photo here is by Menominee native Skip Heckel.

THINGS TO DO IN MENOMINEE

Menominee's latitude is 45.1078° N and its longitude is 87.6143° W. The latitude is close enough to the 45th parallel - halfway between the Equator and the North Pole - that there is a monument somewhere around town that lays claim to that.

Other towns further south in Wisconsin have a more valid claim.

Do You Know Something About Menominee?

Do you have a great story about Menominee or Menominee County places, towns, or persons relevant to the city? Share it with us. We'd love to share your memories and pass them on to our other website visitors.

What Other Visitors Have Said About Menominee

Halfway North
Attached are images of the Halfway North monuments erected by Frank Noyes in 1938. The image with a house in the background is located "approximately 700 …

U.P. Hall of Fame Inductees
Congratulations to the 2021 inductees to the UP Hall of Fame scheduled for this Sunday Aug 15th at the Island Casino. https://upshf.com/ This year’s … 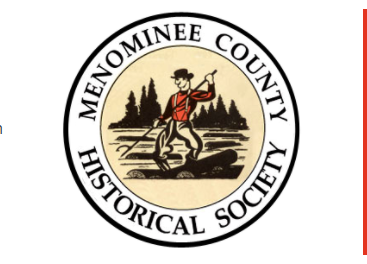